How to Catch a Coyote is the story of a fractured family, told in a fractured chronology. The Walkers must piece together an incident that exiled a daughter, separated parents, and left a son to choose sides. It’s a story of subversion, denial, and deception. What happened, and how can they live with it? 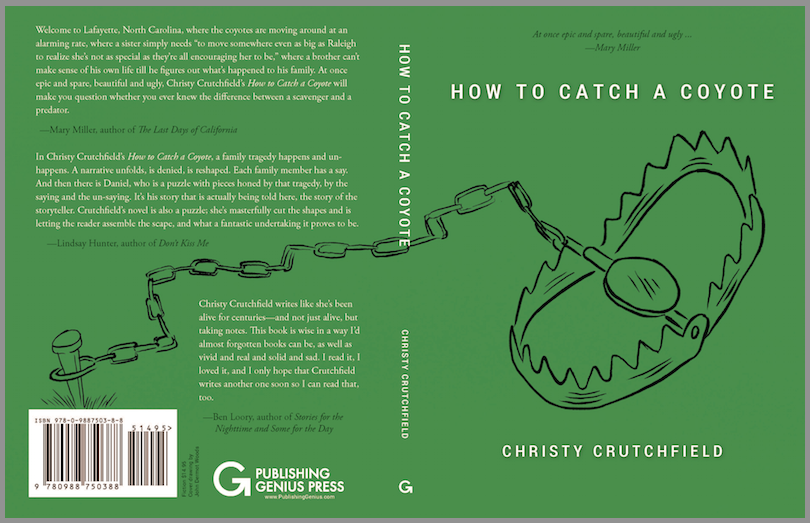 Welcome to Lafayette, North Carolina, where the coyotes are moving around at an alarming rate, where a sister simply needs “to move somewhere even as big as Raleigh to realize she’s not as special as they’re all encouraging her to be,” where a brother can’t make sense of his own life till he figures out what’s happened to his family. At once epic and spare, beautiful and ugly, Christy Crutchfield’s How to Catch a Coyote will make you question whether you ever knew the difference between a scavenger and a predator.
—Mary Miller, author of The Last Days of California

Christy Crutchfield writes like she’s been alive for centuries—and not just alive, but taking notes. This book is wise in a way I’d almost forgotten books can be, as well as vivid and real and solid and sad. I read it, I loved it, and I hope that Crutchfield writes another one soon so I can read that, too.
—Ben Loory, author of Stories for the Nighttime and Some for the Day

In Christy Crutchfield’s How to Catch a Coyote, a family tragedy happens and un-happens. A narrative unfolds, is denied, is reshaped. Each family member has a say. And then there is Daniel, who is a puzzle with pieces honed by that tragedy, by the saying and the un-saying. It’s his story that is actually being told here, the story of the storyteller. Crutchfield’s novel is also a puzzle; she’s masterfully cut the shapes and is letting the reader assemble the scape, and what a fantastic undertaking it proves to be.
—Lindsay Hunter, author of Don’t Kiss Me

Her novel, How to Catch a Coyote, inspects a quietly tragic family through the lens of friends, lovers, teachers, and the family’s own members with a sharp novelist’s eye that seems to take in everything. — Gabe Durham at The Rumpus

It is the reader’s great pleasure to see this animal of a novel assemble itself, to study its elegant form, and to learn its nature. The very structure unfolds around the nature of a beast: the coyote.
— The Masters Review

Beyond the measured reveal of each character, it’s Crutchfield’s precision in language that enlivens this world and challenges us to look carefully, interrogate farther.
— Michelle Dove at PANK

Crutchfield manages to take our attention away from the 'did he or didn’t he' storyline and to draw our attention to another one: What becomes of this broken family?"
— Heather Scott Partington at Electric Literature


Though its prose is often straightforward, it’s also deeply evocative, and the structure—with jumps in time and perspective—makes for a heady and surprising ride.
—James Heflin at The Valley Advocate

Email ThisBlogThis!Share to TwitterShare to FacebookShare to Pinterest
Home